NEW PRAGUE, MN (February 22, 2005) -Inspired by the patients and families at a Hospice center in Connecticut, the O'Neill Brothers' latest CD celebrates music's unique ability to uplift people's hearts and provide a sense of hope as they travel on an often-difficult road. 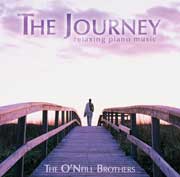 The Journey, the O'Neill Brothers' seventeenth CD, was inspired by weekly performances at the Hospice Center in Branford, CT. The peaceful, serene setting overlooking the ocean moved the brothers to write and perform music that would uplift and soothe patients and their families.

"We're convinced that music has an amazing ability to offer a real sense of hope and encouragement for people dealing with the difficulties of life," says Tim O'Neill. "Whether it's coping with the illness of a loved one or trying to understand a tragedy that doesn't seem to make any sense at all, people remind us time and again about music's power to soothe, heal and help them get through difficult times." The CD is dedicated to Robert O'Neill, Tim and Ryan's father, who passed away in 2004.

The CD includes relaxing favorites such as You Raise Me Up, From a Distance, Somewhere Out There, Imagine, The Prayer, All Through the Night, Angels Watching, Hand in Hand, and What a Wonderful World. The CD also includes five original songs composed by Tim and Ryan O'Neill.

Tim and Ryan O'Neill have sold more than one million CDs - without being associated with a major record label. Along the way, the brothers have written and performed music for HBO (including music for "Sex and the City"), NBC and ESPN; and performed for President George H.W. Bush. In February 2005, their 3-CD set of romantic songs, From the Heart, hit #30 on the Billboard Catalog Album chart. And their wedding album, A Day to Remember, quickly became the best-selling CD on weddingchannel.com and theknot.com.